Graduated from the CEMS MIM programme in 2014, Assistant Brand Manager in Digital P&G.
Class of 2014
Norwegian School of Economics

Many CEMS graduates have chosen to work with CEMS Corporate Partners. In this interview series, we investigate how they’ve been doing.

Today, we catch up with Jo Skybak Holmsen, completing his CEMS year at the Norwegian School of Economics and the ESADE Business School and graduating from CEMS in 2014. He is currently working at P&G in Marketing as an Assistant Brand Manager in Digital for Olay Europe & IMEA.

What I perceived to be a strong focus on personal development and ownership, combined with a sustainable and flexible work-life balance approach. P&G and I seemed to agree that quality of work is superior to quantity of work and it's great to have an employer which believes that freedom to pursue interests outside of the workplace makes for happier employees who deliver better results.

I work as an Assistant Brand Manager for Olay, one of the world's largest skincare brands, and am leading the brand's efforts in accelerating Digital across EIMEA. This involves managing aspects such as Web, Search, Social Media & E-commerce across markets in the region including the UK, Germany and India.

I was originally offered a position in Stockholm after a successful internship there in 2011, but actually decided to decline after being offered a spot in the CEMS MIM program. Still, I was brought back for another P&G internship in Oslo the year after, followed by internships at Grey London and L'Oreal. In the spring of 2014, whilst helping to establish the craft brewery 7 Fjell, which was combined with writing my master thesis, I suddenly got a phone call offering me a full-time role at P&G in Geneva. The opportunity was simply too good to pass up and four weeks later I moved to Switzerland.

4. What has been the highlight of your job so far?

Being able to work at the intersection of technology and marketing, and every day experiencing how digital is impacting everything we do and not just how we shop. Despite working for one of the world's biggest companies, my role sometimes makes me feel like I'm still in a start-up, because at the end of day the majority of my work entails doing things the brand has never done before and that is new to even the most senior directors.

5. What makes working at P&G unique?

I believe that even though many companies claim to provide a high level of responsibility and ownership from day one, P&G is one that actually follows through on this. By now I've lost count of the number of times I've thought: "Who has made a mistake and put poor, recently-graduated me in charge of all this?" But even though their tendency is to throw you into the deep end of the pool to force you to learn to swim, you won't end up drowning.

6. How has your CEMS MIM degree helped in your role?

CEMS has provided a great foundation for delivering in my role, maybe especially from a cultural perspective. At the Geneva office every single meeting is bound to consist of a different set of cultural backgrounds. The CEMS experience, including a year on the Student Board, has given me a head start in understanding how to constantly be able to adapt style and communication to fit with this. Also, through Alumni spread across the company, CEMS proved to be an amazing social platform which made coping with a new job in a new country much easier.

7. The CEMS programme is often considered to be a bridge between the academic and corporate world. Would you agree with this assertion?

For me, CEMS helped soften the transition between the theoretic academic world and the more practical corporate one, both through the focus of many of the courses as well as the business project and internship requirement. Even more importantly, CEMS also helped me see more of the virtues of choosing an international career, helping me overcome many of the barriers normally associated with that. 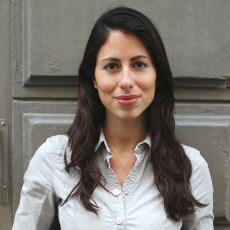 "Get outside of your comfort zone, the scarier something feels to do, the better it is - that’s where you grow. "

"The CEMS network has always inspired me because of the value of different cultural approaches to create impact. It has also helped me to foster relationships across the globe."

"I am currently working on strategic communication projects across Europe and North America. I love the amount of ownership and responsibility I have and feel that I can make a real difference with my work."

"The CEMS network includes a lot of renowned companies and you have very quickly the opportunity to meet the different HR departments during annual meetings and events organized by CEMS."